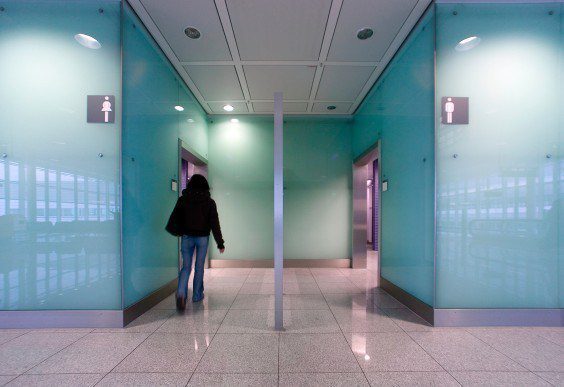 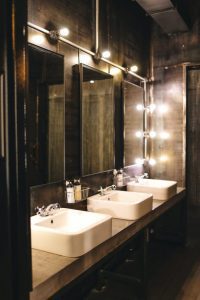 In the 21st century, it’s easy to take public washrooms for granted. Whether in the workplace or a restaurant, we expect nearly all buildings to have some sort of public washroom.

However, we haven’t always had that luxury. Before washrooms, people has to use cramped, dirty rooms with no sanitation, or go outside. Dying from a waterborne illness was common, and the lack of sanitation often left an unbearable stench throughout cities.  In Ancient Rome, public washrooms (benches with holes in them to act as seats) could only be used by men. This forced women to stay close to the home, or avoid food and drink when going out in public.

It wasn’t until 1851 that we saw the first “public washroom” that included a flushing toilet. Unfortunately, people who menstruate would have to wait another century before sanitary disposal would make its way into washrooms.

It’s clear washrooms have changed immensely over the past centuries and how we use them has changed too! What we do in the washroom, which stall we use, and our hygiene habits in the washroom have all changed over time. Let’s see how!

Why Do People Avoid Public Washrooms?

We may not realize it, using a public washroom is a very emotional experience. From the anxiousness some of us feel when someone else walks in, to the feelings of disgust we experience in dirty washrooms, it’s almost impossible to separate our emotions from our washroom experience. Common complaints include nasty odours, poor sanitation, lack of toilet paper and soap, and dirty menstrual disposal bins! Consistently delivering a hygienic and pleasant washroom experience to all users can help eliminate the negative emotions often associated with having to use a public washrooms.

Which Stall Do People Use?

People typically pick the stall they think has been used the least. Recent research has found that women use the first stall the least, ironically making that one the cleanest. Oppositely, men chose the stall closest to them, leaving the stall furthest away as the cleanest.

Women Take Longer in the Washroom 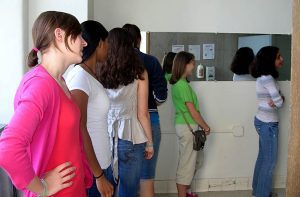 Numerous studies have found that women take longer in the washroom than men- could explain the long lines! Not only this, but women are also less likely to sit directly on the toilet seat, opting to squat or cover it with toilet paper instead.

When it comes to handwashing – 84% of people don’t do properly, leaving their hands covered in bacteria. In fact, it’s been found that people actually lie about whether or not they’ve washed their hands! Promoting handwashing through signage and having clean touch-free fixtures that limit cross-contamination are some of the best ways to promote proper handwashing. This is especially important because while people may not wash their hands as well as they should, washing users are still very wary about touching washroom surfaces like doors and flush handles.

Whether paper towel or hands dryers are better is an age-old debate. While both methods have their benefits, avoiding warm-air hand dryers should be the focus. Warm-air hand dryers often suck up bacteria and redeposit it on freshly washed hands as they dry them. There are trade-offs for each method, but regardless of which method you chose, make sure your hands are thoroughly dried before leaving the washroom.

Why are people spending so long in the washroom?

A number of studies have shown that about 50% of people respond to texts or emails while in the washroom. Between 30-40% check their social media or browse the web, and 63% read books or magazines.

With all that undisturbed time, it’s no surprise that people are multitasking while in the washroom. Although most people today don’t visit the washroom without some form of entertainment, this isn’t a new development.

Historically, catching up with reading has been a washroom pastime since at least the days of the Romans. In fact, the Romans used to keep a library of scrolls outside bathhouses for visitors to catch up on their reading.

More recently, newspapers have become a portable and affordable reading option. It was even sometimes used as toilet paper during the depression-era in the United States. Today, you’ll even find novelty toilet paper with jokes and short anecdotes on them!

It’s projected that by the end of 2020, 80% of Canadians will have phones. News, music, social media, and books are available at the palm of our hands! Today, 1 in 20 people admit to taking a phone call while in the washroom. Insights like these come as no surprise when the average person touches their phone over 2500 times a day!

It’s clear that having clean and hygienic washrooms is a great way to leave a lasting positive impression on people. A hygienic washroom also informs how people perceive the hygiene in the rest of your facility. Often times a dirty washroom means a dirty facility. Having a dirty washroom can be the difference between a regular customer and a bad review! Upgrading your washroom with touch-free fixtures like AutoSoap, AutoFaucet, and touch-free Personal Hygiene Disposal not only looks better, it helps stop the spread of germs and promotes good hygiene within your facility.

Find out how we can help elevate your washroom experience. Talk to us.

Get your FREE QUOTE today

Get your FREE TRIAL today